We at NTK serve the research and higher education communities as well as members of the professional and general publics in a professional and friendly manner. We help create and nurture an intellectual environment in which information is transformed into knowledge while supporting research and development, while additionally fostering the learning process. We collect, create, and reliably store knowledge and facilitate access and communication to it through trusted systems and strategies. We offer a warm, inviting, and stimulating environment, both physically and virtually. We are continuously educating ourselves and assist others in their ongoing development.

We want NTK to be the perfect academic library supporting the transfer of innovation into practice.

"The library is a service"

Your Partner in the World of STEM Information

The National Library of Technology (NTK) is the largest and the oldest library of science and technology literature in the Czech Republic, with a collection of over 1.5 million volumes. Its primary function is to provide specialized information resources and services to students, teachers, and researchers in the fields of engineering and applied sciences, as well as to educate members of the general public interested in STEM information.

Housed in a modern, ecological building situated in the heart of the Dejvice engineering and technology campus, NTK provides an ideal environment for studying to students and scholars, with 1,322 places to study and 562 places to relax. The library offers individual and team study rooms, classrooms, self-service print/scan/copy services, an After Hours Study Room open whenever the library is closed, reference services, and:

In addition, the library serves as a social and cultural center, with frequent lectures, educational tours, events, and exhibitions.

The library is an ideal meeting place for everyone, with a spacious ground floor, the Prague 6 branch of the city’s Municipal Library, a computer store, and a pleasant café. The Czech Technical University (CTU) / University of Chemistry and Technology (UCT Prague) bookstore is also located here.

NTK is also a supporter of educational institutions and provides excursions, internships, summer schools, and continuing education courses, among other types of instruction.

The library offers remote access to approximately 18,000 eJournals in the fields of science, technology, and medicine for students, educators, and researchers from more than 70 universities, the Institute of the Czech Academy of Sciences, and other large libraries and research organizations. It is the largest provider of such services in the country, and additionally offers document delivery services that enable patrons to order articles, books, and other materials from anywhere in the world.

At the national level, the library manages the National Licensing Centre for Electronic Information Resources–CzechELib; the National Repository of Grey Literature (NUŠL); the Czech National ISSN (International Standard Serial Number) Center; and is the national service center for the Virtual Polytechnic Library (VPK), a fee-based, robust document delivery service for sharing science and engineering resources among participating Czech libraries. NTK's ZÍSKEJ (Czech only) is a new national platform for resource sharing and the largest Czech node for interlibrary loan and document delivery services.

The library coordinates its activities with neighboring universities and research institutes. For example, ChemTK is a collaboration with the University for Chemistry and Technology, Prague’s Center for Information Services and the the Information Technologies and Services Department at the Institute of Organic Chemistry and Biochemistry. The library also collaborates with the Czech University of Life Sciences in Prague.

If you become a library patron, you can access selected online databases and other electronic resources. Detailed information can be found in the Library Rules.

Construction of the current building began in 2006, and it opened to the public on September 9, 2009.

The building is also home to the Czech Technical University Central Library.

The National Library of Technology in Prague originated in 1718 as a donation of a collection of books that once belonged to Christian Willenberg (1655-1731), the first Engineering Professor of the Czech Estates.

On November 9, 1717, the Czech Estates Decree instituted the "Professorship of Engineering" for the purpose of teaching "military skills" (i.e., construction of fortifications). Effective January 1, 1718, Professor Willenberg was given 300 gold coins to purchase books and teaching materials, which were used to start the library's historical collection.

Initially, the library materials were stored in Willenberg's apartment in the so-called Saxon House located in Prague's Lesser Town, where he also taught courses. The decree also appointed 12 individuals to serve as his students.

In 1720, students' complaints about the inconvenience of having to walk from their dormitories in Old Town across Charles Bridge to Willenberg's apartment prompted him to move. The book collection was then transferred to a house on the corner of Liliová and Anenská Streets (identified as a hostel for tailor's journeymen) in Prague's Old Town.

On March 1, 1726, Johan Ferdinand Schor (1686-1767) was appointed as the second Engineering Professor of the Estates. Professor Schor taught students from his apartment in the Golden Wreath House on Small Square, where he curated the materials and used his own funds to enrich the collection.

Beginning in 1767, student enrollment at the Estates School of Engineering (the original name given to the Engineering Professorship of the Estates) significantly increased under the director of Franz Leonhard Herget (1741-1800). Continuing the tradition of teaching students and managing the library, Herget's first location was at Týnská Street, in the so-called Broumovský House on Kozí Plácek Square, that was demolished in 1900.  Later, he taught in a house at the corner of Old Town Square and Melantrichova Street.

The need for more space prompted Herget to relocate the engineering school to the Clementinum (1777-1786). The new site included a lecture room, three small rooms for library materials, and a garden with a water drive that allowed for the performance of mechanical and physical experiments. While the exact location within Clementinum remains unknown, it is assumed to have been somewhere in the southern wing in a former Jesuit print shop (now the Karlova Street entrance).

In 1778, the Estates began paying Professor Herget an annual allotment of 250 goldens to purchase library materials.  During this time, the school's shifting interests from military to civil engineering was reflective of Herget's library collection policy that began adding resources in mathematics, physics, architecture, and mechanics.

In 1786, one of Herget's most significant achievements was the acquisition of St Wenceslas' Seminary, a former Jesuit seminary, for the engineering school. The Old Town building currently remains on Husova Street (formerly Dominikánská Street).

The polytechnic educational institutes (predecessors of present-day Czech Technical University between 1786-1935) were formed under the roof of the former St Wenceslas' Seminary.

In 1806, the Estates School of Engineering officially transitioned into the Estates Polytechnic Institute. In 1869, the Institute became separated into two entities-Czech and German Institutes. In 1875, both sites were managed by the Austrian Ministry of Culture (previously, they were governed by the Czech self-administration authorities).  The library served students and scholars from both Institutes until 1945, when the German Institute was closed.  Until 1960, the library's official name was the Technical Universities Library.

The library was located in the rear section of the seminary. In 1834, a two-story wing was erected in the seminary's courtyard, which meant that visitors had to walk across two courtyards in order to gain entry from the street. Originally, the first floor of library consisted of three rooms with a total floor area of 114 m2. In 1875, a renovated flat that had previously belonged to the Institute's Director, created a student reading room, gave the library 73 more seats, and an additional 102 m2 (beginning in 1863, the Institute no longer had a Director but rather a Rector an elected position appointed to a one-year term). In the effort to keep apace with the collection's continued growth, in 1891 the German Institute's Rector assigned another hall to its operations.

During the early 1830s the collection was managed by notable librarian František Josef Knight Gerstner (1756-1832), who began the systematic classification of materials. On May 31, 1831, Gerstner entrusted Karl Joseph Napoleon Balling (1805-1868), an adjunct in the chemistry department and later professor and rector of the Institute, with the task of organizing books previously acquired by other professors. Establishing five thematic groups for organization of the library's materials: mathematics, architecture, chemistry, mechanical, and military engineering, Balling served as library director until 1865.

Technical Universities Library (TUL) in East Wing of the Clementinum

In 1920, during the inagural meeting of the university council of the newly established German/Czech Technical University, a decison was made "to move the shared technical library into more appropriate spaces." In February 1927, the Rectors of the German and Czech Technical Universities jointly appealed to the Ministry of Education to create a common Technical Universities Library (TUL) in the Clementinum. In response to the petition Dr. Borecký, the director of the public and university library,  assigned part of the eastern wing of the Clementinum to the TUL.

Working in conjunction with library director PhDr. Antonín Moucha, the renovations were completed by Architec Dr. Ing. Ladislav Machoň and the library was opened on May 9, 1935. The reading room accommodated 142 readers and the historical wooden ceiling (previously the Jesuit theatre) was renovated by Academy of Arts graduate B. Číla. Praised across Central Europe for its technical innovations, the library's interior featured a pneumatic mail system, which consisted horizontal and vertical tubes that allowed for transport of one-three publications in closed metal baskets. The system was based on an original design by Dr. Moucha and was manufactured specially for the library by Mikrofone. These renovations increased vistorship from 37,000 patrons in 1934 to over 100,000 by 1936.

In 1960, the library was renamed as the State Library of Technology (STK). Having now outgrown the space at the Clementinum, the library procured remote storage facilities over four years, beginning in 1974, in Prague 4-Písnice and in Lhota near Dolní Břežany (each with capacity for 200,000 volumes). Despite the additional storage facilities, space for the library's collection remained inadequate. By the mid-1990s, the Ministry approved contruction of a new National Library of Technology in Prague 6-Dejvice, on Prague's engineering campus.

Construction of the National Library of Technology (NTK) began in 2006. The modern, state of the art building opened in September 2009. An aesthetically pleasing place to broaden both the mind and the spirit, the library was designed to hold more than 1.7 million volumes and there are up to 500,000 volumes accessible in open stacks. The building includes 1,286 study spaces, 29 individual study carrels, 18 team study rooms, a 24-hour After Hours Study Room, a cafe, a gallery, bookstore, and 448 places to relax. 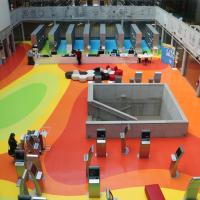 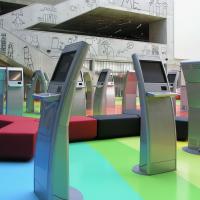 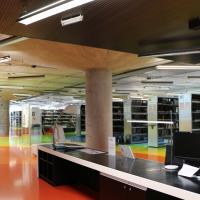 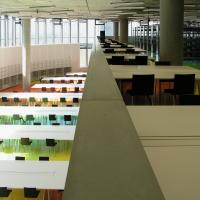 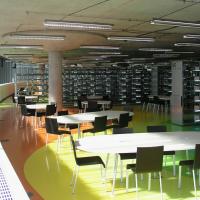 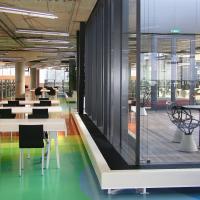 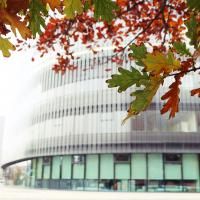 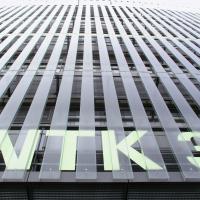 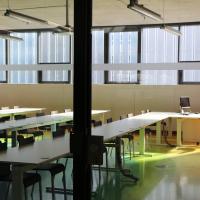 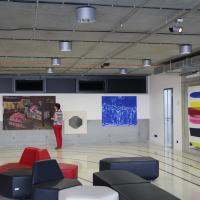 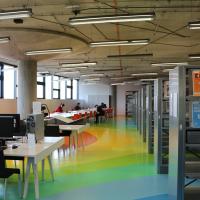 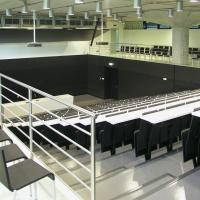 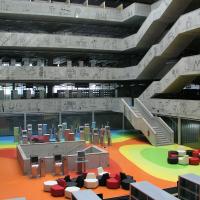